The Climate Leadership and Community Protection Act has set New York’s target of obtaining 70% of its energy from green sources by 2030 and 100% renewables by 2040.

Previously Governor Cuomo wanted to make New York a “National Leader” by having renewables provide 50% of the state’s electricity by 2030 – a Goal known as “50 by 30”.

This means an increase in electricity prices because of mandated payments from you, to fund the projects. Avangrid and other developers have a history of partnering with NY State agencies to win funding for their projects.

In addition, to date, no commercial wind project in New York state has been built without a PILOT agreement that provides significant property tax relief to the developer.

YOUR MONEY -  MANDATES AND SUBSIDIES

by Ken Girardin
Upstate New York ratepayers will pick up more than half the multi-billion-dollar tab for a massive offshore wind turbine project that will provide very costly power for Long Island and New York City.
https://www.empirecenter.org/

by Robert Bryce
In New York and New England, Wind Energy Projects Are “Like Siting Landfills. Nobody Wants Them.”  New York is becoming a wind-energy plantation for New England.

"New Englanders like the idea of wind energy they just don’t want any wind turbines in New England. So they are putting them in New York."
https://www.realclearenergy.org

October 26, 2021
Congress eyes $235B in clean energy subsidies. Here they are
https://www.eenews.net

June 17, 2021
Why Was $66 Billion Spent on Renewables Before the Texas Blackouts? Because Big Wind and Big Solar Got $22 Billion in Subsidies
https://www.realclearenergy.org

December 27, 2020
Why Is Solar Energy Getting 250 Times More In Federal Tax Credits Than Nuclear?

March 30, 2021
…a renewable energy tax incentive has come under fire for squeezing the county out of tens of millions of dollars each year.

January 9, 2020
Progressive Eco-Group Admits It: Renewable Energy Is a Hoax that Benefits its Greenie Elmer Gantries like Al Gore
https://www.americanthinker.com

Wind and Solar Energy: Good for Nothing... understanding the subsidies provided to wind and solar.

NEW! increase to fee on your electric bill, brought to you by NYSERDA and the Clean Energy Standard:
ESRM charges effective 4/1/2017

Wind power companies get by with a little help from their friends - By Perry White
http://www.watertowndailytimes.com/news

March 27, 2017
Hiding the Increase
How Governor Cuomo is masking a huge energy-tax hike in the name of “consistency.”
https://www.city-journal.org/

Iberdrola Warns Of The Risk From Trump To US Renewables’ Growth Plan
http://thecorner.eu/

March 03, 2017
PSC covers up “clean energy” cost.
State regulators last week shot down efforts by utilities to show ratepayers the amount by which their electric bills are being driven up by New York’s new Clean Energy Standard.
http://www.empirecenter.org/

Big Wind's Bogus Subsidies - Giving tax credits to the wind energy industry is a waste of time and money.  Despite being famous for touting the idea that the rich don’t pay their fair share of taxes, investor Warren Buffet seems to be perfectly fine with receiving tax breaks for making investments in Big Wind.

January 16, 2017 - In New York, Wind And Solar Get Double Their Value In Subsidies
http://dailycaller.com

The IRS expanded the two-year development window to four years [from two years to give] … developers countless ways in which to secure the full PTC and never experience the phased-down PTC in the years 2017, 2018, and 2019.

This essay is the second in a series aimed at exposing abuses by the Obama administration in its effort to force wind power on the public.

Our series of graphics illustrating how your money is used to fund industrial wind projects.

PAID FOR BY YOU - INDUSTRIAL WIND SUBSIDIES

"Mike, we are a green energy company, but the green stands for money."

(to reassure one of Enron’s coal executives)

Ibrudrola representative explaining sale of electricity and need for a partner to build this project.

Visit our follow the money... "how big wind works" page for graphics that illustrate this topic and see how you pay for funding.

Tax equity financing, a scheme based on special tax breaks and gaming the corporate income tax of a highly taxed corporate partner.

April 1, 2021
Opinion - Such a gift. Since the mid-1990s the wind power industry has made a living off of a federal tax credit (the Production Tax Credit --PTC) earned according to a formula for whatever power they generated – whether that power was needed by the grid or not – and even if their bidding price in wholesale power markets was zero!

So what you have in effect is the wind industry living off a federal subsidy in the form of a tax credit that can be sold. That is where the “profit” is in the wind business. It is not a profit in any traditional business sense, but it is real money and it has drawn hundreds of developers – large and small – into the wind business to enjoy the benefit of something generally not found in the business world – a sure thing.

This tax credit mechanism is an indirect way for the federal government to pay the wind power business to exist. Wind power is thus really not a business; it is a federal program run by private contractors. And these private contractors are not paid directly by government appropriations. They are paid “off budget” through the Tax Code.

But now Senators Carper, Heinrich and Whitehouse (among the wind lobby’s best friends in Congress) want the Tax Code amended to allow wind generation owners (and the other renewables owners) to skip the step of “earning” the PTC and marketing it to buyers. They are saying that for new wind projects, wind developers should be free to simply calculate what their tax credit will be and then the government will just issue a check for that amount. Done. Why make this complicated? Why should wind owners have to wait for their money?

(The accountants who work for wind developer/owners will like the straightforward simplicity of this. But perhaps the Wall Street investment bankers who package these tax credits and find buyers for them, and take their cut, won’t like the fact that their services will no longer be needed.)

May 1, 2020
What Engie's tax equity deal tells us about financing renewables
https://www.greenbiz.com

YOUR WAGES, PAID AS TAXES

"For example, on wind energy, we get a tax credit if we build a lot of wind farms. That's the only reason to build them. They don't make sense without the tax credit." 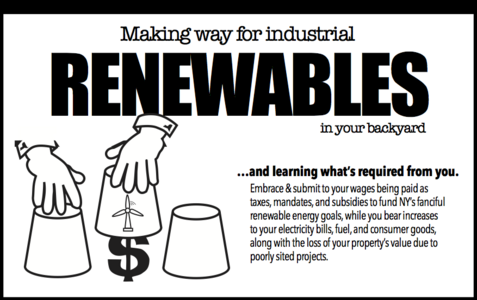