Published on Oct 29, 2015
California’s Altamont Pass wind farms are famous for killing hundreds of raptors each year, including an estimated 35 golden eagles. Biologists are studying how golden eagles fly through the wind farms. The information is helping companies place their wind turbines out of the birds’ way. 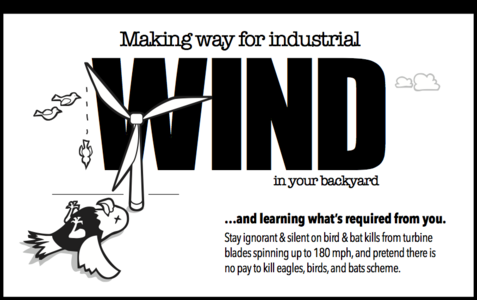 Published on Dec 5, 2009
The Golden Eagle along with thousand of other birds are killed yearly by wind turbines at Altamont Pass. Dr. Shawn Smallwood, Biologist, has collected data on the bird fatalities at Altamont Pass since 1999. He is convinced that the process of approving Wind Farms in rural communities has become corrupt.

Wind Turbines Take Steep Toll On Birds And Bats
Published on Oct 10, 2012
Mounting evidence that expanding "wind farms" are taking a toll on airborne wildlife. Thousands of birds and bats are killed every year by collisions with the the wind towers and their giant blades. As VOA's Zulima Palacio reports, environmental activists are taking the wind energy industry to court to find a solution.

Thousands of birds and bats are killed each year by spinning industrial wind turbine blades. Iberdrola will seek a "take" permit to kill species such as the American bald eagles in the North Ridge Industrial Wind Project proposed for our towns.

How Many Birds Are Killed by Wind Turbines? American Bird Conservancy

February 28, 2021
The color of this green technology is blood red
Commentary: Opinion of Bob Hassoldt Hassoldt is a field forester who lives in Kendrick, ID.

May 10, 2017
Bats Massacred by Wind Turbines May Get Reprieve in Sweden
https://www.bloomberg.com/news

...mutilated corpses of snow geese spread out over several miles.

Fatalities at wind turbines may threaten population viability of a migratory bat
https://www.wind-watch.org

A massive wind turbine slaughter to bald eagles is coming to America.
http://www.windtaskforce.org

What effects do wind turbines have on domestic animals & wildlife?

Urge your local government to adopt a Moratorium on wind and solar development to allow them time to research and create laws that will protect you from many negative health, environmental, and economic impacts.